Ma Garmai is cleaning up after cooking dinner outside her makeshift hut in Grand Cape Mount County, North-Western Liberia. She lives in a basic house, measuring just 225 square feet. It is well below the standard she anticipated when she was first displaced from her community. It has been four years since the Bea Mountain Mining Corporation (BMMC) relocated her family and more than three hundred other households from their homes in Kinjor, promising them that they would quickly be resettled in upgraded housing. The company gave them a small amount of money to build temporary houses – sufficient for a few months while they waited for their new homes to be constructed. Four years later, the houses are still not complete and the displaced community members continue live in tiny shacks on a scrap of land overlooking their unfinished homes.

Frustration over the endless delays is a frequent topic of conversation for Ma Garmai and the other ex-residents of Kinjor. They have a long list of grievances relating to the mining project. One resident expressed exasperation that the recently completed medical centre does not stock basic medications. When she visited the clinic for treatment, she was given a prescription for medicines that were only available from another clinic in a town several miles away.

In 2009, the government of Liberia awarded BMMC the rights to develop a gold mine in Grand Cape Mount County. The company began construction in 2014 following the ratification of the Mineral Development Agreement and began evicting residents of Kinjor and nearby Larjor soon after. The Resettlement Action Plan committed the company to resettling all 325 affected families. The company agreed to compensate or provide replacements for all “dwelling and business structures, community facilities, economic trees, agricultural fields, graves and sacred sites located within the proposed mine footprint and associated 500m blasting zone”. In total the company promised $3.9m of investments in establishing a brand-new settlement to be named ‘New Kinjor.’ Construction of the improved houses was to be completed by January 2014, while BMMC was to assist in the construction of ‘temporary housing’ on the outskirts of the new resettlement village for the residents to occupy during the construction of their homes. The company also promised employment for local residents as labourers, cooks and farmers. 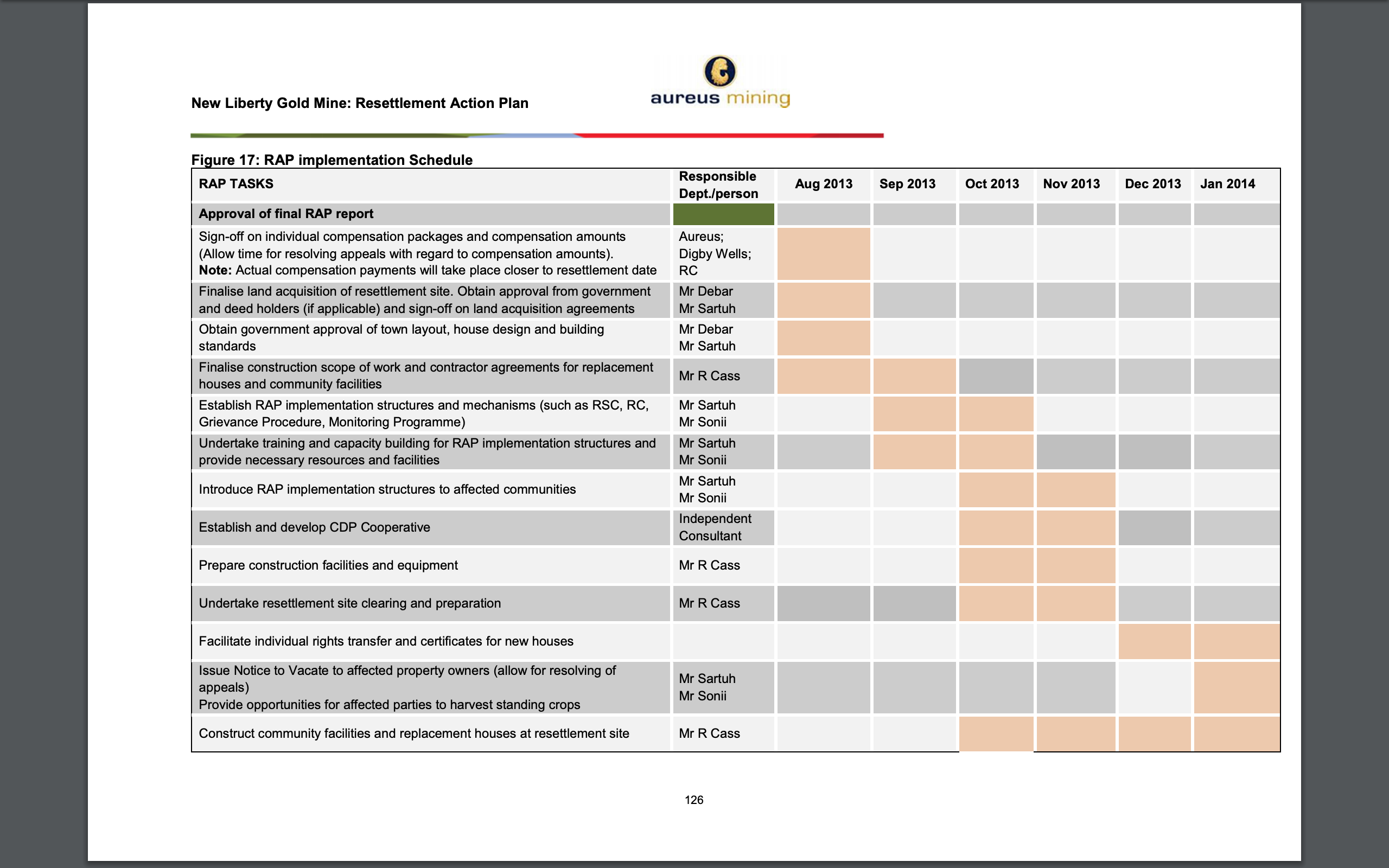 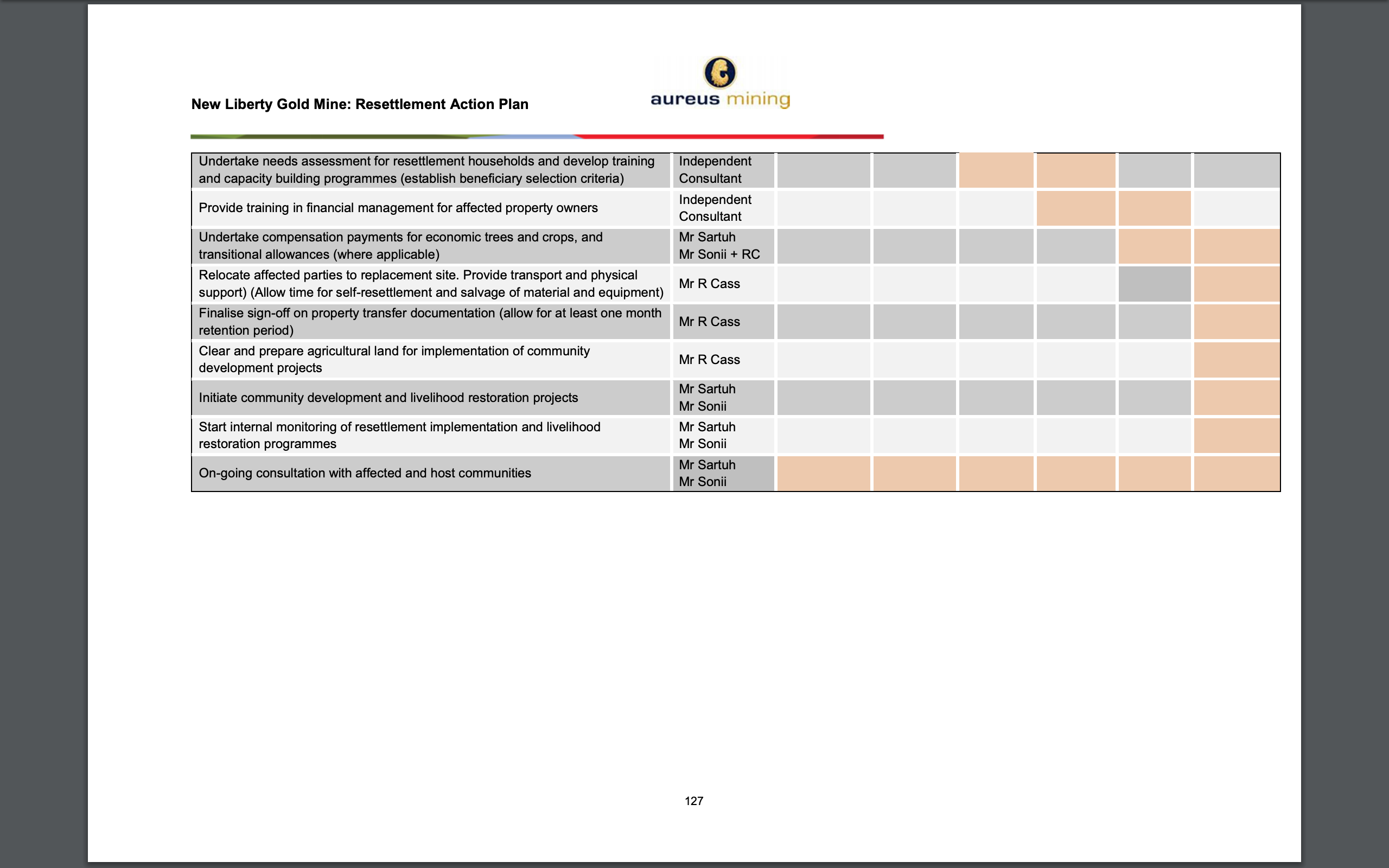 Despite the promises, there are still limited local employment opportunities and, according to residents, most of those working for the company come from Liberia’s capital, Monrovia. Some women in the community have also made disturbing reports about company staff demanding sex in return for employment and denying opportunities to those who refused. We reached out to Avesoro Resources and the International Finance Corporation for comment, however they had not responded at the time of publication.

The situation in Kinjor is just one example of how the livelihoods of communities in Liberia have been affected by extractive companies, and how difficult it is to hold such companies accountable for their actions and broken promises. The situation in Kinjor also demonstrates the disproportionately negative impact that the extractive industry has on women, who are typically responsible for the health and well-being of their families while often excluded from community meetings and other interactions with the companies.

As part of Transparency International’s ‘Women, Land and Corruption’ project, CENTAL and TIMBY partnered to provide tools and training to women from two communities in Grand Cape Mount; to document the commitments made by companies operating in their communities and monitor implementation of the action plans. Over an eight-month period, local women photographed legal documents related to land acquisition and resettlement plans, corporate social responsibility commitments, and recorded commitments made by staff and executives of BMMC during community forums. These ‘community reporters’ also captured photographic and video evidence of the quality of the restitution they received, the status of roads and health clinics, as well as testimonies from women about their interactions with the company.

With the help of CENTAL, women in Kinjor are now exploring opportunities to cooperate with local journalists and lawyers in developing investigative stories using the data collected by the residents of Kinjor themselves. Nearby in Madina, reports by these ‘community reporters’ are being used to present evidence to Sime Darby management and promote dialogue between the company and community. Such reporting is helping to shift the discussion and strengthen the community’s hand in their dealings with the company by providing reliable evidence that cannot be dismissed as hearsay or mere rumour. 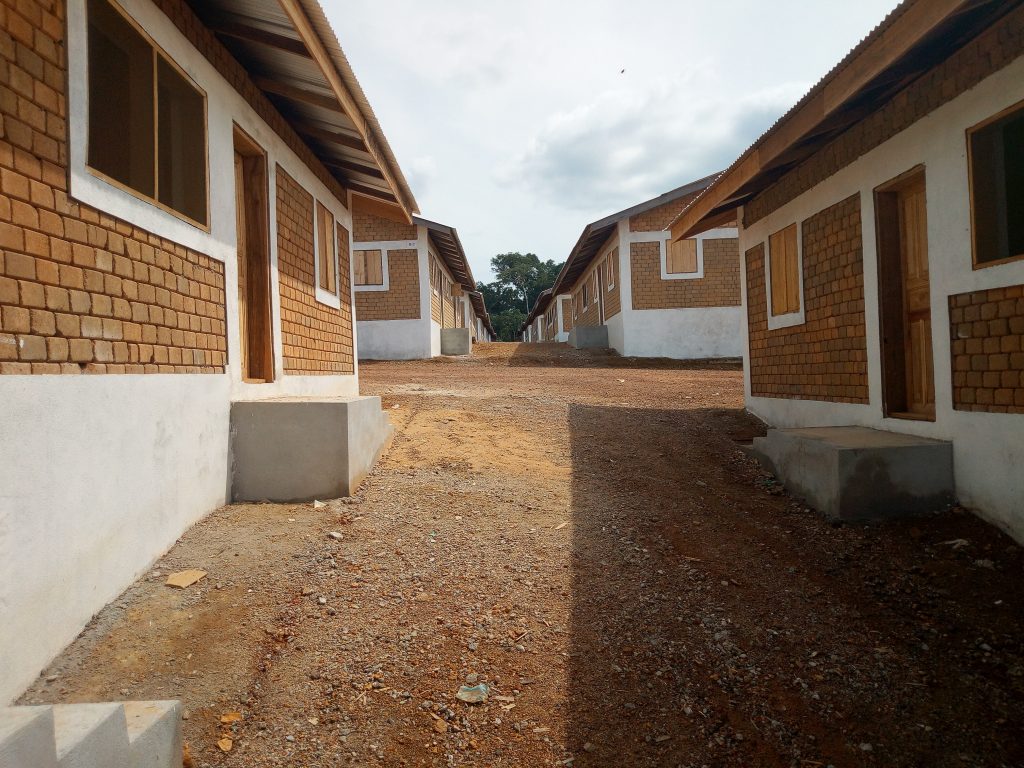 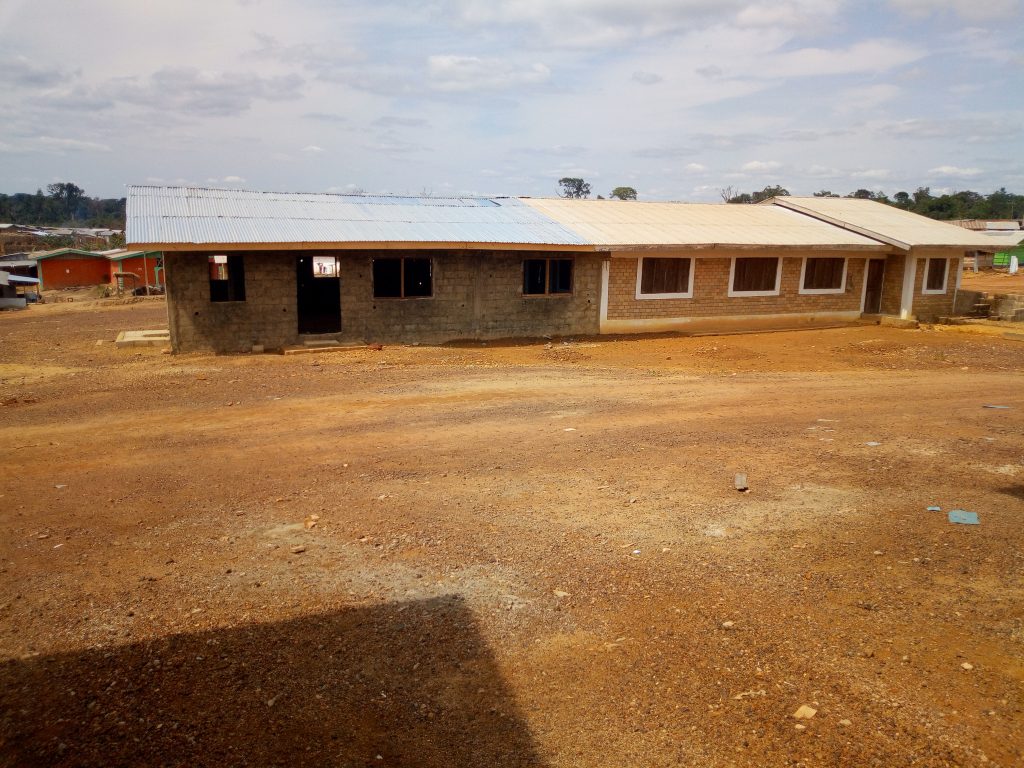 The project has highlighted the importance of ensuring that women can meaningfully participate in conversations about land. While the inclusion of under-represented voices is important on its own merit, it also has significant effects on the type of information coming from communities. In Kinjor, reports created by women focused more on the well-being of families such as substandard housing in relocation villages, sexual harassment, gender discrimination, and problems with the delivery of services such as healthcare. These concerns can differ significantly from those documented by the men in the same communities, who may be more likely to report on issues such as boundary disputes and unemployment. This is further evidence that such projects must seek to engage not just the dominant voices but work to ensure that marginalized voices can be heard as well.

This project comes on the heels of an important development in Liberia. The Land Rights Act (2014) – which promises to recognize customary land and women’s equal land rights but faced setbacks during a Senate review in mid-2017 - has finally been passed (though is not yet implemented). The international human rights organisation Global Witness voiced concerns that the Land Rights Act could be stripped of the protections of customary land rights, which includes women’s equal rights to customary land, before being finally being implemented.

Projects such as the BMMC gold mine are often promoted as opportunities for development bringing employment, improved access to healthcare and education. They can be. But these opportunities will only be realised if agreements are entered into in good faith, and if companies fulfil the promises they make to communities. In Liberia, it is too easy for companies to make big promises to communities, knowing that they will not be held accountable. Compliance monitoring is low, as responsible government institutions blame logistics and low resource capacity for the inefficiency. 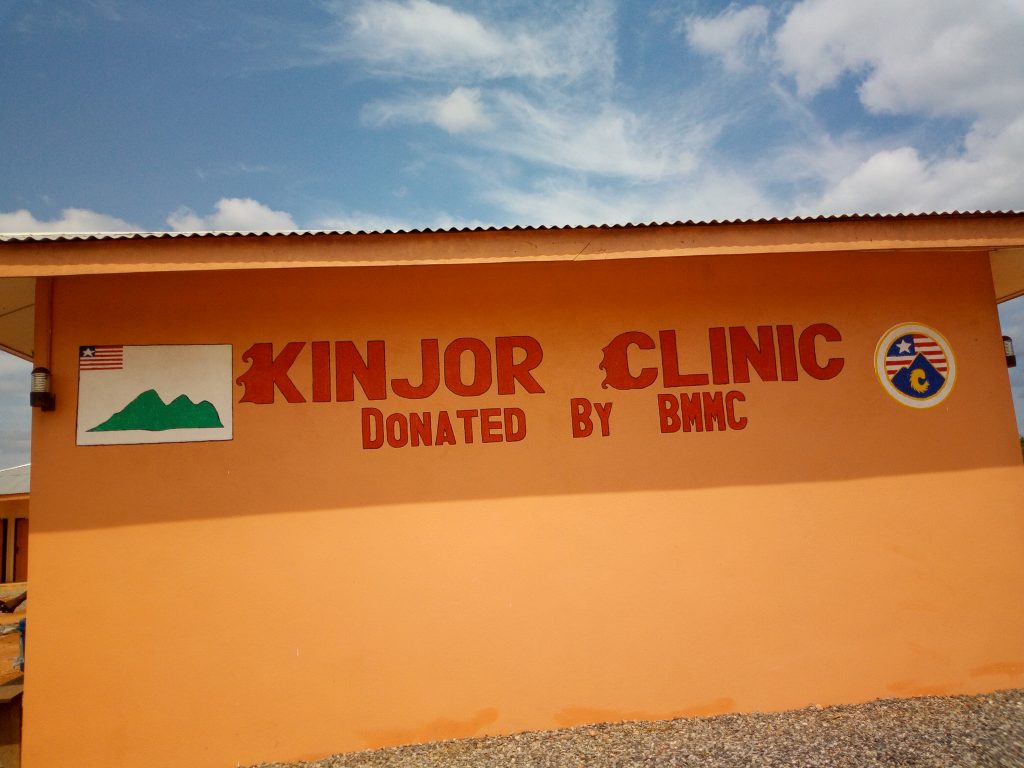 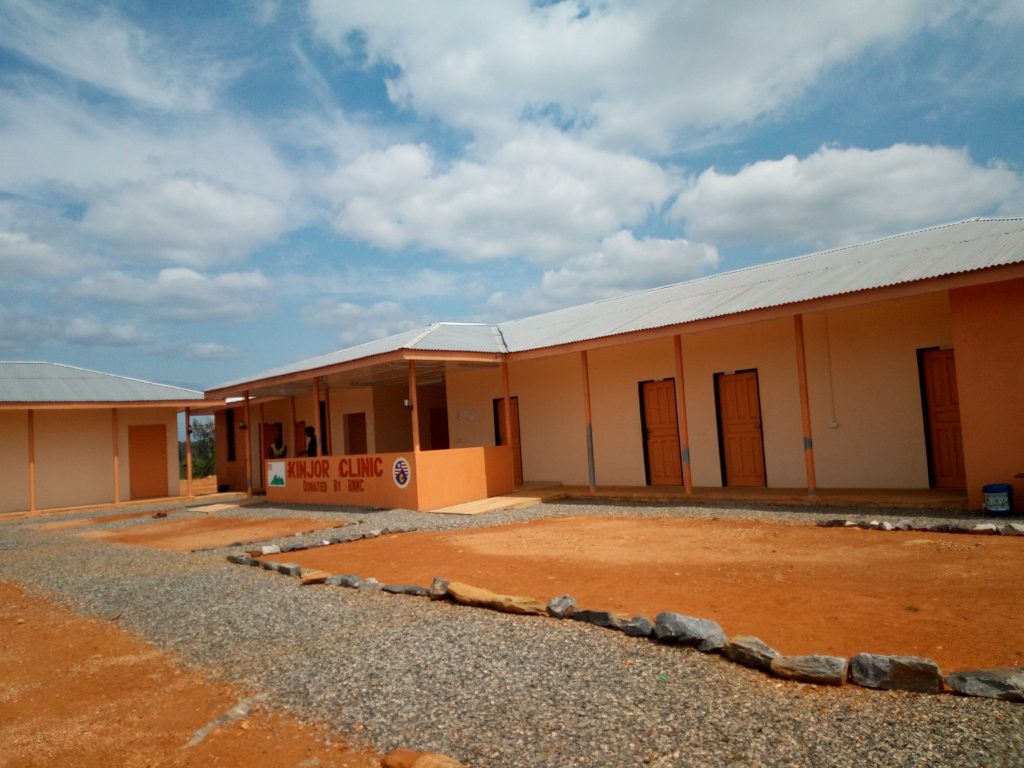 Too often, government places a premium on taxes and other payments while doing little to ensure that the communities receive their share of the benefits. With the passage of the Land Rights Act, communities are hopeful for change. As owners of the land, they will be key actors in negotiations around large-scale land-based investments rather than a requirement to fulfil international best practices such as free-prior-and-informed consent (FPIC). This will only strengthen the importance of ensuring that communities are empowered to document the issues themselves.

Cut off from infrastructure and means of communication, and without the tools to document what’s happening on the ground, communities are often unable to fight for their rights. The women of Kinjor are working to change that. Robust documentation can help create a more transparent – and ultimately more fair – process and will leave both communities and companies better off.