Since 2013, groups have been using TIMBY to document issues such as land tenure, environmental conservation and corruption. We are excited that TIMBY is helping elevate the voices of communities in decision-making about their land; it’s a first step in creating equitable land rights discussions both locally and globally. But we’ve noticed that TIMBY isn’t always being used in an equal and fair way with respect to gender: the reporters in early TIMBY projects were almost all men.

James Otto, the head of Community Rights and Corporate Governance at Liberia’s Sustainable Development Institute (SDI), notes that men in Liberia – where TIMBY was piloted – tend to be more engaged than women, when it comes to land issues. This is partly because women do not commonly own land in Liberia; the country’s forested areas are mostly governed by customary law, where land rights are acquired through patrilineal inheritance. Even if a man dies, his widow is only entitled to a third of their shared land, under customary law. Since land policy discussions (especially at the local level) center around the right to own land, women are often left out of decision-making related to resource management.

Lack of access to information and education in rural areas also limits women’s understanding of policy documents and their participation in resource management issues, says Julie Weah, the head of the Foundation for Community Initiatives (FCI) in Liberia. According to UNICEF, only 37% of young women in Liberia are literate compared to 68% of young men, because families choose to send their sons to school rather than their daughters. Weah believes that women’s lack of access to education causes low self-esteem when discussing important community issues like land tenure. And so, even when women attend community meetings, they often do not contribute to the discussion. 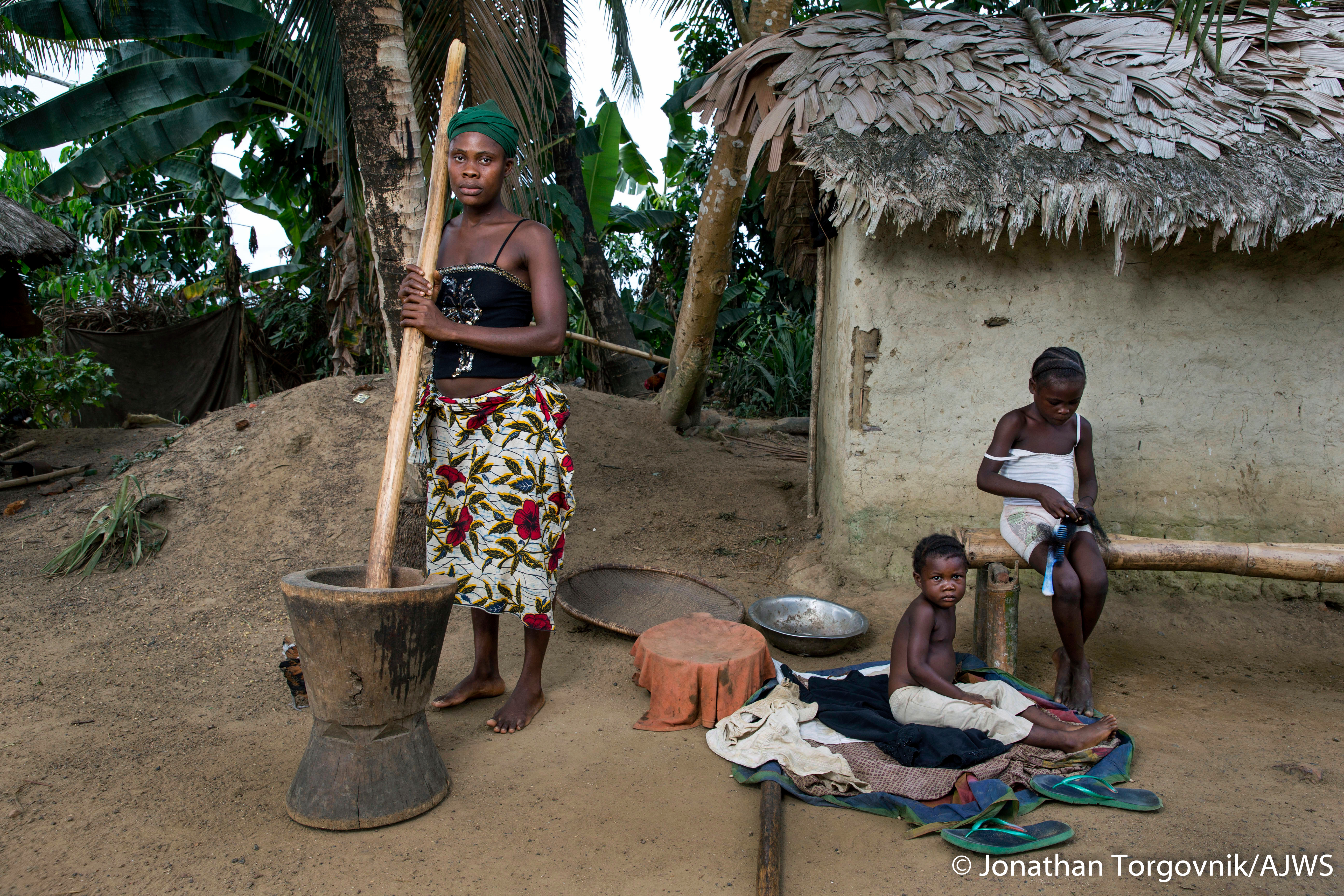 Woman works and cares for her children in Liberia.

Otto points out that despite the limits to their engagement, women are disproportionately affected by land issues because they are responsible for the family’s needs. Women plough the land, collect wood, sell crops at market and gather medicine from plants: women produce 60% of agricultural products and carry out 80% of trade in rural areas. Women are the link between land, health and community well-being, and the impact of the lack of women’s voices in decision-making is not adequately understood.

In Liberian communities where FCI is based, Weah has sensed women’s frustration about their exclusion from community governance. Women living on customary land are becoming more motivated to take positions of influence in their communities and in resource management discussions. This trend could increase with slated reforms to Liberia’s land laws, which will enable women to formally own land. Liberia’s Land Rights Act, submitted to legislature in 2014, will acknowledge customary land ownership by all community members, irrespective of gender, if and when it is passed by the legislature.

The rapid growth of internet access in the Global South has created a new public space where women’s issues can be brought to the attention of the global community, as long as women have access to the ICTs and they are designed around women users and their issues. Through well-designed ICTs, women can share land concerns in their own words and language confidently.

Increasing the number of female TIMBY reporters, for example, could help communicate the importance of land to community well-being and health, and the experiences of women’s lack of secure access to land. Publishing stories that convey women’s inequalities in land tenure could inspire policies which improve women’s access to land and encourage women’s inclusion in resource management discussion. Otto says: “I strongly believe that if women are in the field and documenting, stories that have to do with the rights of women will come….if women have the phones, you will see interesting stories about their issues about participation, issues about how their opinions on natural resources are respected or not respected.” 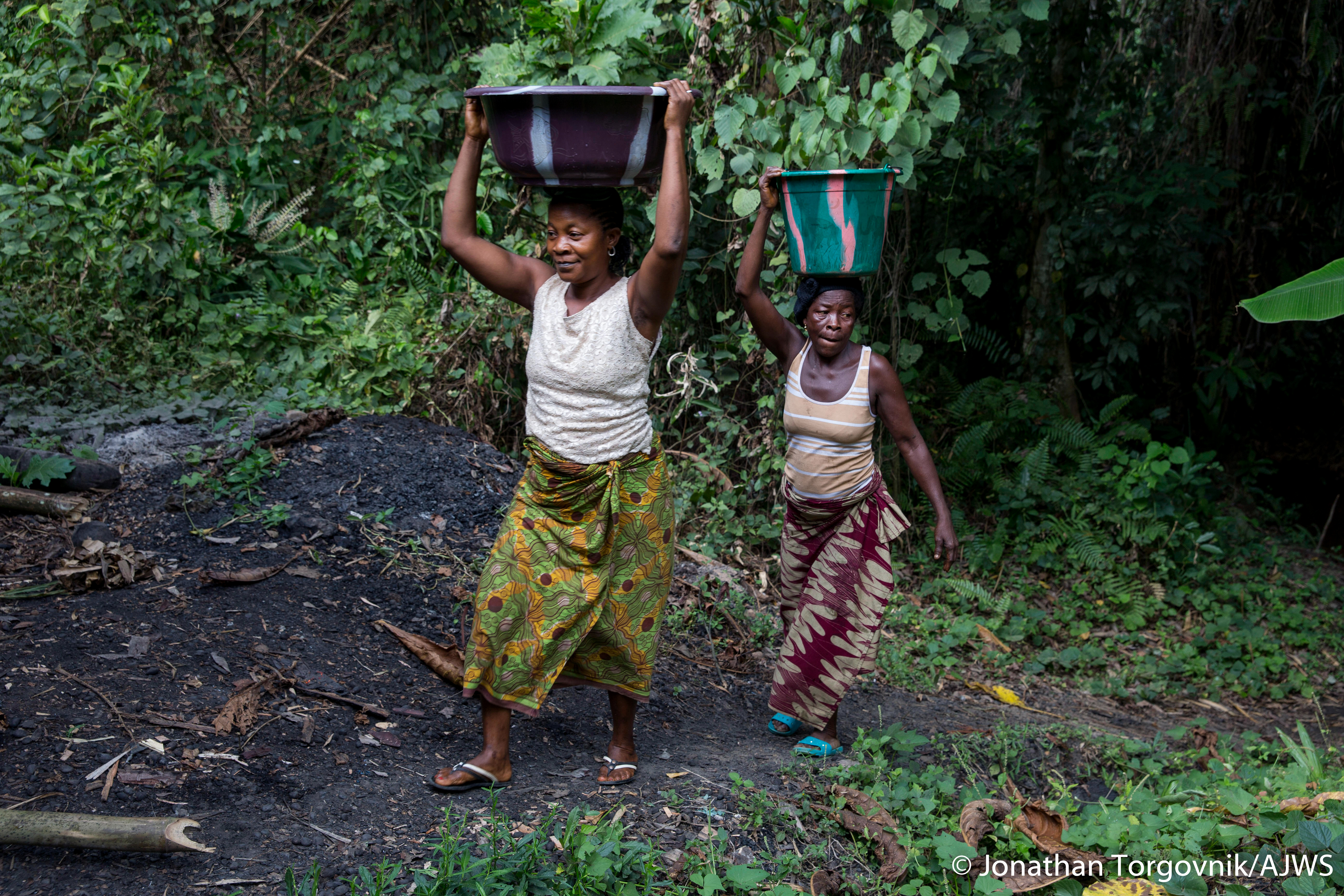 Women carrying resources to their community in Liberia.

A new collaboration between Transparency International and TIMBY (part of the Women, Land, Corruption in Africa Project) hopes to address the inequalities both in access to information and participation in land and resource discussions. The approach will adapt TIMBY to the needs of a group of women working on land issues in East Africa.

TIMBY will be providing handsets to the women’s network and use their feedback to redesign the platform and training programs to best fit their needs. This may include an icon-only application to accommodate low literacy rates among women’s groups, or reading material and lessons specific to women’s needs.

Around half of the inquiries we’ve had for TIMBY projects in the last six months have been from women’s groups that are exploring ICT as a possible solution to today’s complex problems. We anticipate this first pilot with Transparency International will lead to learning that helps women’s groups more broadly. As a woman-led and managed organization working in the field, this is an issue very close to our hearts.